At 15 ½ years old, Jim Calhoun lost his father to a sudden heart attack. That event forced him to become the man of the house and help support his mother and five brothers and sisters financially and emotionally. It can be argued that his father’s death planted the seeds of a life dedicated to coaching and leading young men.

Joe D’Ambrosio, UCONN broadcaster – “To hear that his father died while he was on a little league field had a huge effect on him and that’s why he loves his players so much. I think he always wanted to be a father to the kids, sometimes a tough father and sometimes a loving father.”

Jeff Jacobs, columnist Hartford Courant – “He would compare himself to Father Flanagan from the movie Boys Town and there’s some truth to that but he also could be father son of a gun.”

George Blaney, UCONN former assistant coach, “It’s like a father with his children. He can criticize his children but if anyone else does they are in for a fight.”

Rudy Gay, former player – “Growing up I didn’t have the best relationship with my father. He would try to play the role but there was something missing. The things that I needed to learn about being a man, coach really helped me with that.”

Donny Marshall, former player – “When Calhoun came to my house he said, ‘I don’t know if you’ll play in the NBA. I don’t know that you’ll even start for us but I promise you that you will be a better man when you leave UCONN.’”

Scott Burrell, former player “You come to UCONN as a boy and leave here as a man.” 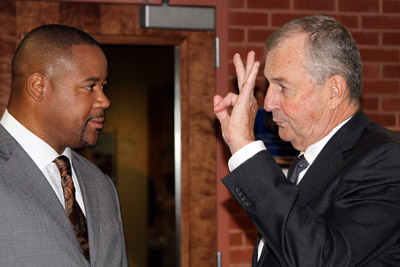 Calhoun didn’t have it easy growing up even while his father was alive. He wasn’t handed anything as a boy and in turn wasn’t going to hand anything to his “boys” over the next 40 years at Northeastern and UCONN. He demanded dedication and hard work and preached the importance of loyalty, family, resilience, underdog determination, and trust, all critical traits ingrained in him by his parents. Yes, there would be gray areas. Not everything would be spelled out. There would be different buttons to push for different players. A season with Calhoun wasn’t intended as a warm and fuzzy trip to Disney Land, the happiest place on earth. It was “tough love”, a phase everyone around Calhoun would become all too familiar with during their tour of duty. On the eve of the Big East Tournament in 2011 after finishing the season with a thud, Calhoun told his team “pick up your heads, we’re going to war.”

Relationships between fathers and sons can be complicated and so too was the relationship Calhoun had with the hundreds of players who passed through Storrs and heard the shrill of the whistle. Prior to beating Marquette for his 800th victory, AJ Price and Calhoun didn’t speak for the week leading up to the game. After the victory, Calhoun went up to Price, the leading scorer in the game and said simply, “Thank you.” Price replied, “No, thank you for everything that you have done for me.”

Jake Voskuhl, who was a project when he came to Connecticut in 1996 and experienced more than his share of tough love during his four years at UCONN, said to coach after winning the National Championship, “Why didn’t you like me?” Calhoun replied, ‘I didn’t like you Jake, I loved you.’”

At his retirement press conference Calhoun remarked, “I loved my players. They may not have recognized it while they were here but they know it now.”

Jake Voskuhl – “As you get older you look back and you see that he had a plan for everything he did. That’s when you have that epiphany moment. He did what he did out of love not meanness or vindictiveness.”

Most of his former players are regulars at his charity events and believe me getting an NBA player to answer an email or phone call requires an act of God. So when Ray Allen, Caron Butler, Rudy Gay, Rip Hamilton, Kemba Walker, Ben Gordon and the rest show up religiously at his functions, it speaks volumes. How many of you would show up for a reunion at your former place of employment? After almost a quarter century at ESPN, I wouldn’t. When Calhoun was inducted into the Basketball Hall of Fame more than 50 of his former players were in attendance including some from high school!

More than building a winning program, he built a winning family. And every player who walked through that locker room door, for better or worse, are part of that extended family. Equating a college basketball program with a family sounds like university propaganda. I interviewed more than 30 former players and coaches for the Born to Lead: Jim Calhoun documentary and can tell you that the feeling of family at UCONN is real. Kevin Ollie, UCONN’s current coach played and coached for Calhoun. Ollie’s entire coaching staff played for Calhoun at UCONN. 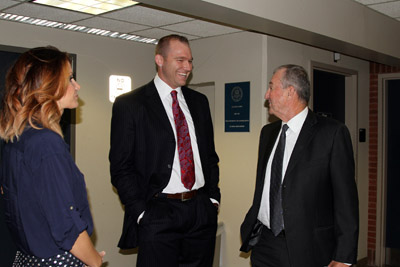 AJ Price, former player – “You showed me the true meaning of the word family.”

Mike Krzyzewski, Duke coach – “His players believe it’s a second home. Whatever the generation, they believe that they are all brothers.”

Calhoun also taught his players the importance of giving back to the community. Many a Thanksgiving, he took his team into the inner city in Hartford to hand out turkeys or had players bring free pizza to students waiting in line in the cold for tickets to a game. He showed them that life is more than X’s and O’s. And that life isn’t just about them.

Seth Greenberg, ESPN analyst – “If his former players had one phone call to make they would call Jim Calhoun. That’s the ultimate reward of coaching.”